The weather routing solver much prefers for a vessel to be moving than to be stationary. This can lead to some surprising results.

Consider this example from the introduction of a vessel which heaves to in the mid Atlantic: 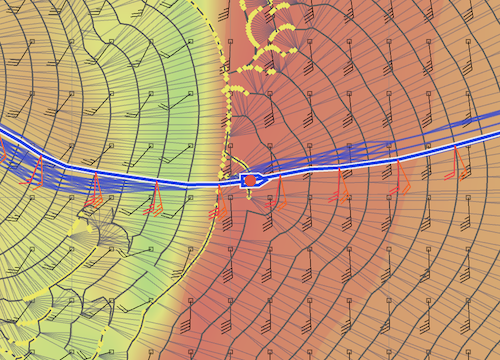 The path shown looks pretty reasonable. It advances into the region where you would be hove to, stays stationary for a period of time, and then resumes sailing toward the target again. As a navigator, you would need to remember that the location where you resume sailing will be different from that shown, and the timing of when you sail again may be different, but that generally looks reasonable.

Consider another example from the mid Atlantic. In this example, the vessel is set to avoid wind speeds greater than 30 knots apparent:

This path has two hove-to sections. The boat starts out being hove to for 5 hours, sails briefly, and then heaves to again for 5 more hours (at the red dot.) The target point for this solution is far to the NNW of this image. Why on earth is the vessel starting to sail in the wrong direction only to tack and then pass close by where it was earlier?

Recall that the solver prefers to be moving than stationary. As soon as it finds a sailing angle that allows it to start moving again, regardless of the direction, it will do so. In this case, it found a downwind sailing angle that was less than 30 knots and has started to sail.

As a navigator, everything else being equal, I would not start sailing knowing that I would need to heave to again in a short while, further away from my target than I was originally, and that if I was to remain hove to and wait a little longer, that the winds would greatly moderate and I could start sailing toward my destination instead.

Here is an example showing six departures, each spaced three hours apart. The first departure is the one which is highlit and was discussed above:

The first, second and third departures each have the boat starting to sail, only to heave to again.

The sixth departure is the first one which starts out sailing toward the destination. It arrives slightly after the fifth departure, remains hove to for longer and experiences slightly less wind.

Somewhere between the fifth and sixth departures, 12 to 15 hours away, it looks like you can start sailing toward your destination.

When should you start sailing again? That’s for you to decide! These tools are designed to help you think about the decision, but the actual decision remains with you, and will likely factor in many other factors, such as crew condition (boats are more stable while sailing,) your surroundings, how well the forecast winds compare to the actual winds, etc.