As you start working with the weather routing solver, you may find that it is generating paths in areas that you know you do not want to sail into. Or it may be generating a path in some direction, and you have a preference to avoid that area and go a different way.

Boundaries will be illustrated with an example route between St. Malo, France and Poole, England. Here is the initial path between these two. Click on either image to see more detail.

Note that the path generated is passing very close to both Jersey and the point NW of Cherbourg.

During this discussion, I will be ignoring tides and current. Also, as LuckGrib is not to be used for navigation, there will likely be many smaller islands in this area, and we have no idea of any of the depths. This example is solely for illustration purposes.

Often, the easiest way to have the solver avoid land by a wider margin is to set the solvers land clearance distance:

In this case, the solver has been asked to stay 2nm away from land, resulting in an improved route:

That’s an improvement. Maybe. How the path travels east of Jersey and west of the small island north may not be what you want. Lets assume that a sailor familiar with these waters is aware of a navigation problem with the path generated and they don’t want to accept that one.

The land clearance value could be increased, trying to stay further away from the islands. However, we reach a point where that approach starts to fail:

The image on the left, with 5nm of land clearance, has a very thin path between Guernsey and Jersey, which may not be desirable. The settings have allowed the solver to sneak through that small gap, and it has done so. If the land clearance value is increased slightly, that route would no longer be available.

However the image on the right looks like it may be failing, as the path is now heading into the islands north of St Malo. Why is that?

Consider what is being requested of the solver. We are asking it to only generate paths which are at least 10nm away from land. However, both the start position and target point are closer to land than 10nm. In order for the solver to accomplish this solution, it relaxes the land clearance value within some radius of the start and target points. If this wasn’t done, the solver wouldn’t be able to generate anything at all (it would immediately fail, which is not considered useful.)

What is needed here is for us to give the solver more precise instruction on the regions we want to avoid.

In this pair of images, a single boundary line has been created, which forces all of the paths to only pass west of Guernsey. In addition, the land clearance value has been set to 1nm.

St Malo to Poole with boundary.

That’s an improvement. However if you look closely, the path crosses through the small islands close to St Malo (as the land clearance value was reduced to 1nm.) This may be undesirable. In this last pair of images, a second boundary has been created which encloses those islands:

Recall the discussion about the full GEFS ensemble from the introduction / uncertainty / ensemble section. A route was shown between Hawaii and Neah Bay, at a time of year when the north Pacific ocean is generally inhospitable. The routes generated exhibited a great deal of uncertainty. 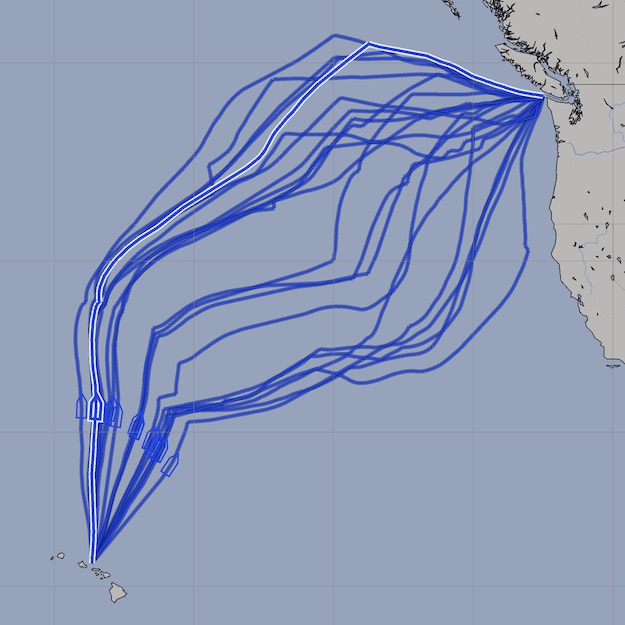 Hawaii to Neah Bay with a single boundary line.

There is a general rule of thumb for this passage, that you head generally north and then turn east when you are somewhere around the latitude of Neah Bay. Many of the routes in the left image do not follow that strategy.

By creating a single boundary line, you can remove all paths which take the more southerly route, and force them north. This is not advice on making this passage, but it does demonstrate how boundary lines can be used to direct the solver to consider some paths and ignore others.

Here is one final example, a passage from the Vava’u island group of Tonga, to the Bay of Islands, New Zealand. A rule of thumb for this passage is to try to cross 30° south somewhere north of New Zealand. This is meant to give you more options as the weather south of this latitude can change quite quickly. This can be described to the solver by creating a gate, using two boundary lines:

Vava'u Tonga to the Bay of Islands.

With a boundary gate.

The solver has also been asked to avoid apparent wind speeds greather than 30kts or less than 5kts. Land clearance has been set to 5nm. This vessel is also slowing down at night (reefing at night) which can be seen in the repeated pattern of closer and further apart isochrones.

In the image on the left, the latter portion of the route is not following the general rule of thumb. This may be the best path to follow, but as it takes over 5 days to reach 30° with this vessel, there is a lot of uncertainty in this weather forecast as you reach that latitude.

On the right, two boundary lines, with a gap between them, were created. This describes a gate to the system, and only paths which go through this gate are allowed.

The passage on the left was showing a passage length of 8 days, 11 hours, 1,189nm. The passage on the right is showing 8 days 17 hours, 1,214nm. It appears that the slightly longer passage shown, with the gate, may place the vessel in a more favorable position, with more navigation options for its approach to New Zealand.

Creating boundary lines on a Mac.

This is described in more detail in the user manual.

Briefly, to create boundary lines, you use the Points and Routes tool:

Click down on the map in the area where you want the start of the boundary to be created. When the menu appears, select Create Boundary.

Then click in the area of the other points that form the boundary, and from the menu, select Add point to boundary.

Any of the boundary points can be moved by clicking and dragging on them.

You can insert new points in a boundary line segment by clicking on the line and choosing Insert Point from the menu. Deleting points, or an entire boundary, is done the same way (click on it, select the appropriate menu item.)

You can manage boundaries through the Routes List. Note that you need to choose Boundaries, from the menu at the bottom of the lister:

If you have a boundary you want to hide from the solver, this lister is where you can toggle the boundaries visibility. Only visible boundaries are considered by the solver.

There is a Routes and Boundaries tool, available in the tool area:

When that tool has been selected, you are able to create and edit routes and boundaries.

The Routes and Boundaries tool is described in more detail, in the manual, but briefly, the buttons allow you to create routes, boundaries, add points to them, move points, delete points and view some information about them.

You can manage boundaries through the Routing area in the sidebar:

If you have a boundary you want to hide from the solver, this boundary list is where you can toggle the boundaries visibility. Only visible boundaries are considered by the solver.